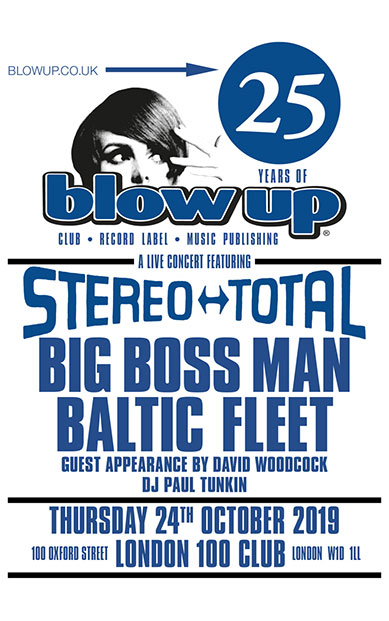 This will be the first UK show in over four years and is an exclusive UK show for the Berlin based band. Blow Up Records released the compilation album Yéyé Existentialiste in association with the band in 2015. They have been live guests at various Blow Up club and live events since the 1990’s and are good friends of the label, we are very happy that they can join us for the night.

Big Boss Man’s debut single on Blow Up Records Sea Groove has just passed the 3 million streams on Spotify, have a long association with Blow Up, the label having released all their four albums to date. Best described as a hip Hammond hybrid of 60’S R’N’B, Latin, Soul, Bongo-Fuzz and Funk. Really one of the UK’s hottest live acts. They are not to be missed live. What was said about the Big Boss Man album Last Man On Earth..

In what will be the first live appearance in London in over five years and only the second live show since the release of the highly acclaimed third album ‘The Dear One’ released in 2016 on Blow Up Records. Baltic Fleet who have recorded three albums to date for Blow Up – Baltic Fleet, Towers, The Dear One. Baltic Fleet is the moniker of multi-instrumentalist and DIY producer Paul Fleming. Although initially bourne from a studio project Paul brings together long-time friends and like-minded musicians who have performed and collaborated on these records for very occasional rare live performances for which the Blow Up 25 is one. What was said of The Dear One on its release…

“A soundtrack for a journey into the cosmos”

“A synth-centred delight …this album is full of swooning glory”

“A definite contender for Album of the Year”

“It’s quite a piece of work is this album”

Paul founded the Blow Up club in1993 and launched Blow Up Records in 1994 with the release of the mail order 7” single by his own band The Weekenders with the record All Grown Up. He established Blow Up Songs in 1996 to deal with the labels music publishing. Paul was also the music director of the award winning live music and club venue the Metro Club, Oxford Street, London. He will DJ and host the event.