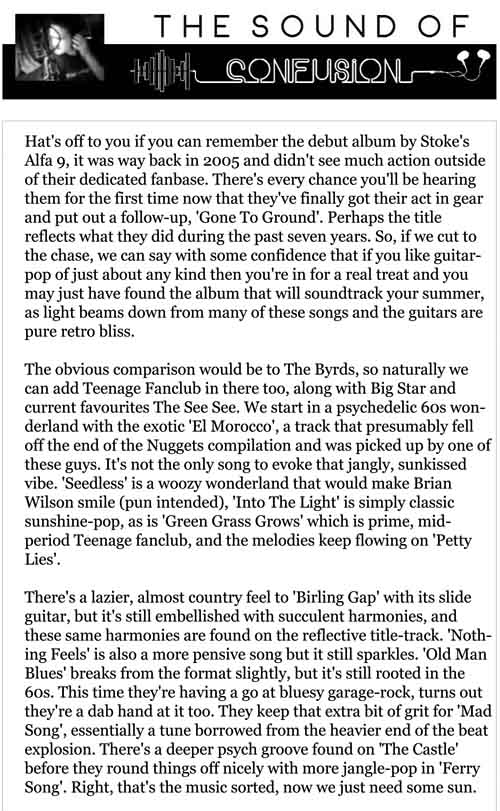 “Hat’s off to you if you can remember the debut album by Stoke’s Alfa 9, it was way back in 2005 and didn’t see much action outside of their dedicated fanbase. There’s every chance you’ll be hearing them for the first time now that they’ve finally got their act in gear and put out a follow-up, ‘Gone To Ground’. Perhaps the title reflects what they did during the past seven years. So, if we cut to the chase, we can say with some confidence that if you like guitar-pop of just about any kind then you’re in for a real treat and you may just have found the album that will soundtrack your summer, as light beams down from many of these songs and the guitars are pure retro bliss. The obvious comparison would be to The Byrds, so naturally we can add Teenage Fanclub in there too, along with Big Star and current favourites The See See. We start in a psychedelic 60s wonderland with the exotic ‘El Morocco’, a track that presumably fell off the end of the Nuggets compilation and was picked up by one of these guys. It’s not the only song to evoke that jangly, sunkissed vibe. ‘Seedless’ is a woozy wonderland that would make Brian Wilson smile (pun intended), ‘Into The Light’ is simply classic sunshine-pop, as is ‘Green Grass Grows’ which is prime, mid-period Teenage fanclub, and the melodies keep flowing on ‘Petty Lies’. There’s a lazier, almost country feel to ‘Birling Gap’ with its slide guitar, but it’s still embellished with succulent harmonies, and these same harmonies are found on the reflective title-track. ‘Nothing Feels’ is also a more pensive song but it still sparkles. ‘Old Man Blues’ breaks from the format slightly, but it’s still rooted in the 60s. This time they’re having a go at bluesy garage-rock, turns out they’re a dab hand at it too. They keep that extra bit of grit for ‘Mad Song’, essentially a tune borrowed from the heavier end of the beat explosion. There’s a deeper psych groove found on ‘The Castle’ before they round things off nicely with more jangle-pop in ‘Ferry Song’. Right, that’s the music sorted, now we just need some sun”