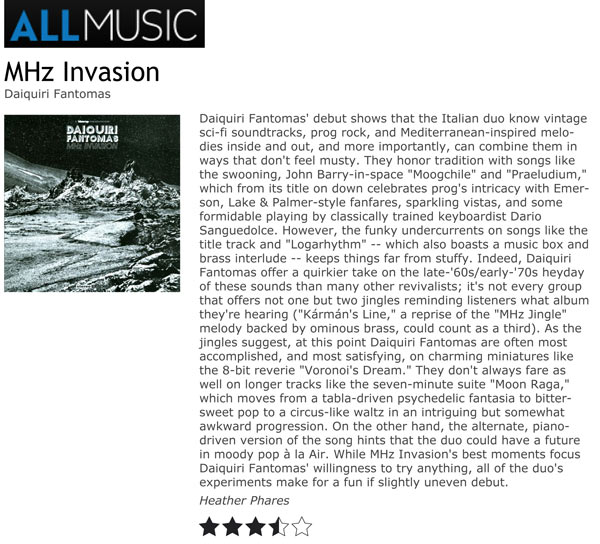 Daiquiri Fantomas‘ debut shows that the Italian duo know vintage sci-fi soundtracks, prog rock, and Mediterranean-inspired melodies inside and out, and more importantly, can combine them in ways that don’t feel musty. They honor tradition with songs like the swooning, John Barry-in-space “Moogchile” and “Praeludium,” which from its title on down celebrates prog’s intricacy with Emerson, Lake & Palmer-style fanfares, sparkling vistas, and some formidable playing by classically trained keyboardist Dario Sanguedolce. However, the funky undercurrents on songs like the title track and “Logarhythm” — which also boasts a music box and brass interlude — keeps things far from stuffy. Indeed, Daiquiri Fantomas offer a quirkier take on the late-’60s/early-’70s heyday of these sounds than many other revivalists; it’s not every group that offers not one but two jingles reminding listeners what album they’re hearing (“Kármán’s Line,” a reprise of the “MHz Jingle” melody backed by ominous brass, could count as a third). As the jingles suggest, at this point Daiquiri Fantomas are often most accomplished, and most satisfying, on charming miniatures like the 8-bit reverie “Voronoi’s Dream.” They don’t always fare as well on longer tracks like the seven-minute suite “Moon Raga,” which moves from a tabla-driven psychedelic fantasia to bittersweet pop to a circus-like waltz in an intriguing but somewhat awkward progression. On the other hand, the alternate, piano-driven version of the song hints that the duo could have a future in moody pop à laAir. While MHz Invasion‘s best moments focus Daiquiri Fantomas‘ willingness to try anything, all of the duo’s experiments make for a fun if slightly uneven debut.