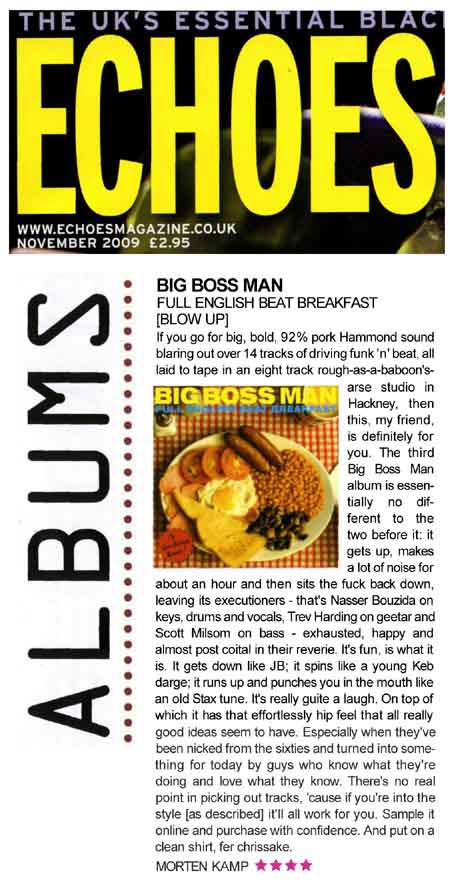 If you go for big, bold, 92% pork Hammond sound blaring out over 14 tracks of driving funk ‘n’ beat, all laid to tape in an eight track rough-as-a-baboon’sarse studio in Hackney, then this, my friend, is definitely for you. The third Big Boss Man album is essentially no different to the two before it: it gets up, makes a lot of noise for about an hour and then sits the fuck back down, leaving its executioners – that’s Nasser Bouzida on keys, drums and vocals, Trev Harding on geetar and Scott Milsom on bass – exhausted, happy and almost post coital in their reverie. It’s fun, is what it is. It gets down like JB; it spins like a young Keb darge; it runs up and punches you in the mouth like an old Stax tune. It’s really guite a laugh. On top of which it has that effortlessly hip feel that all really good ideas seem to have. Especially when they’ve been nicked from the sixties and turned into something for today by guys who know what they’re doing and love what they know. There’s no real point in picking out tracks, ’cause if you’re into the style [as described] it’ll all work for you. Sample it online and purchase with confidence. And put on a clean shirt, fer chrissake