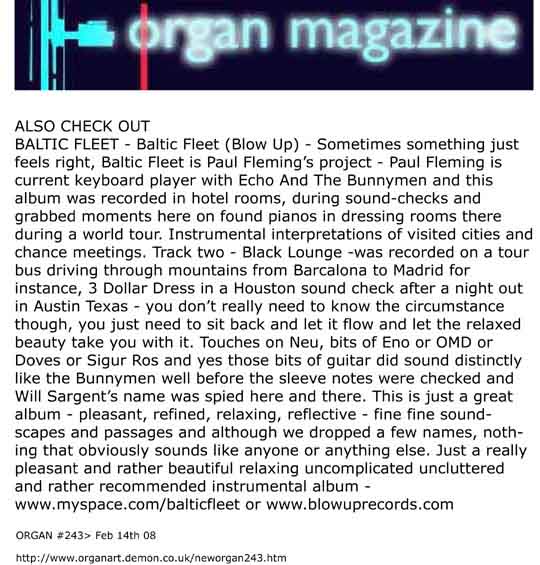 BALTIC FLEET – Baltic Fleet (Blow Up) – Sometimes something just feels right, Baltic Fleet is Paul Fleming’s project – Paul Fleming is current keyboard player with Echo And The Bunnymen and this album was recorded in hotel rooms, during sound-checks and
grabbed moments here on found pianos in dressing rooms there during a world tour. Instrumental interpretations of visited cities and chance meetings. Track two – Black Lounge -was recorded on a tour bus driving through mountains from Barcalona to Madrid for instance, 3 Dollar Dress in a Houston sound check after a night out in Austin Texas – you don’t really need to know the circumstance though, you just need to sit back and let it flow and let the relaxed beauty take you with it. Touches on Neu, bits of Eno or OMD or Doves or Sigur Ros and yes those bits of guitar did sound distinctly
like the Bunnymen well before the sleeve notes were checked and Will Sargent’s name was spied here and there. This is just a great album – pleasant, refined, relaxing, reflective – fine fine soundscapes and passages and although we dropped a few names, nothing that obviously sounds like anyone or anything else. Just a really
pleasant and rather beautiful relaxing uncomplicated uncluttered and rather recommended instrumental album –