Scootering Recommended Listening The Bongolian – Bongos For Beatniks (Blow Up) 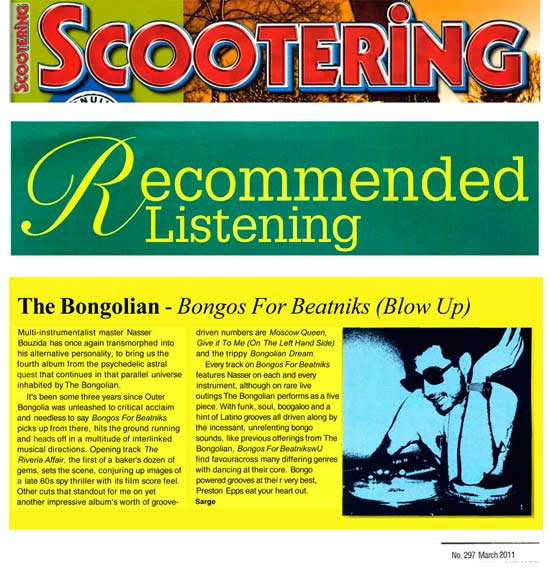 Multi-instrumentalist master Nasser Bouzida has once again transmorphed into his alternative personality, to bring us the fourth album from the psychedelic astral quest that continues in that parallel universe inhabited by The Bongolian. It’s been some three years since Outer Bongolia was unleashed to critical acclaim and needless to say Bongos For Beatniks picks up from there, hits the ground running and heads off in a multitude of interlinked musical directions. Opening track The Riveria Affair, the first of a baker’s dozen of gems, sets the scene, conjuring up images of a late 60s spy thriller with its film score feel. Other cuts that standout for me on yet another impressive album’s worth of groovedriven numbers are Moscow Queen, Give it To Me (On The Left Hand Side) and the trippy Bongolian Dream. Every track on Bongos For Beatniks
features Nasser on each and every instrument, although on rare live outings The Bongolian performs as a five piece. With funk, soul, boogaloo and a hint of Latino grooves all driven along by the incessant, unrelenting bongo sounds, like previous offerings from The Bongolian, Bongos For Beatniks find favour across many differing genres with dancing at their core. Bongo powered grooves at their very best, Preston Epps eat your heart out.