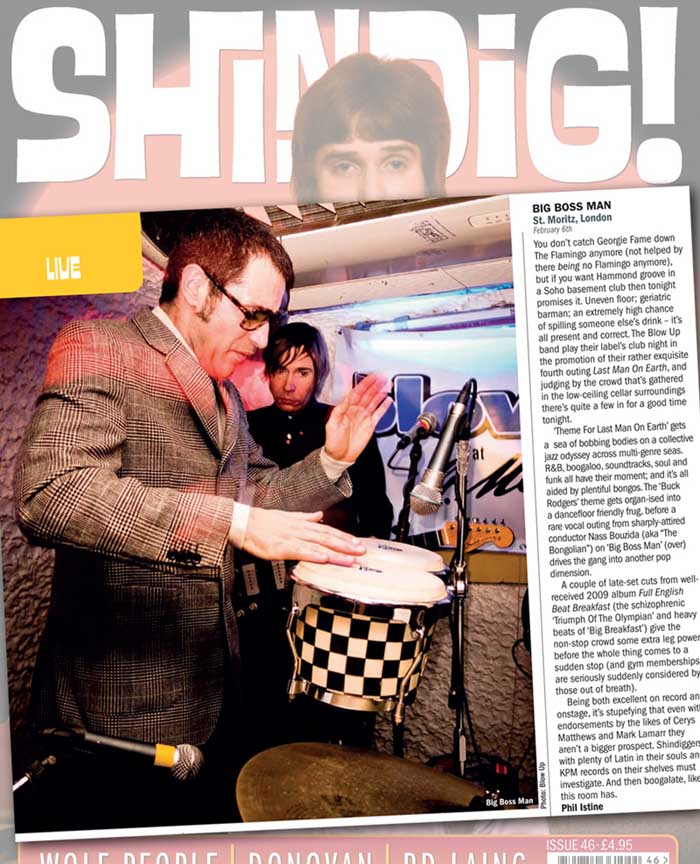 You don’t catch Georgie Fame down The Flamingo anymore (not helped by there being no Flamingo anymore), but if you want Hammond groove in a Soho basement club then tonight promises it. Uneven floor, geriatric barman; an extremely high chance of spilling someone else’s drink – it’s all present and correct. The Blow Up band play their label’s club night in the promotion of their rather exquisite fourth outing Last Man On Earth, and judging by the crowd that’s gathered in the low-ceiling cellar surroundings there’s quite a few in for a good time tonight.

‘Theme For Last Man On Earth’ gets a sea of bobbing bodies on a collective jazz odyssey across multi-genre seas. R&B, boogaloo, soundtracks, soul and funk all have their moment; and it’s all aided by plentiful bongos. The ‘Buck Rodgers’ theme gets organ-ised into rare vocal outing from sharply-attireda dancefloor friendly, frug, before a conductor Nass Bouzida (aka “The Bongolian”) on ‘Big Boss Man’ (over) drives the gang into another pop
dimension.

A couple of late-set cuts from well received 2009 album Full English Beat Breakfast (the schizophrenic ‘Triumph Of The Olympian’ and heavy beats of ‘Big Breakfast’) give the non-stop crowd some extra leg power, before the whole thing comes to a sudden stop (and gym memberships are seriously suddenly considered by those out of breath).

Being both excellent on record and onstage, it’s stupefying that even with endorsements by the likes of Cerys Matthews and Mark Lamarr they aren’t a bigger prospect. Shindiggers with plenty of Latin in their souls and KPM records on their shelves must investigate. And then boogalate, like this room has.