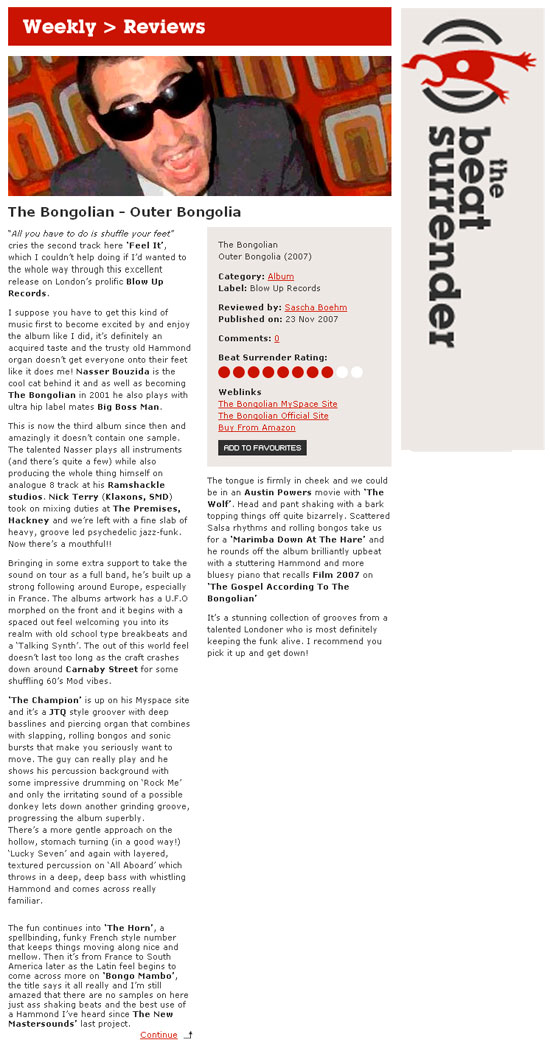 ‘All you have to do is shuffle your feet’ cries the second track here ‘Feel It’, which I couldn’t help doing if I’d wanted to the whole way through this excellent release on London’s prolific Blow Up Records. I suppose you have to get this kind of music first to become excited by and enjoy the album like I did, it’s definitely an acquired taste and the trusty old Hammond organ doesn’t get everyone onto their feet. And you’ve been so busy lately that you haven’t found the time, to open like it does me! Nasser Bouzida is the cool cat behind it and as well as becoming The Bongolian in 2001 he also plays with ultra hip label mates Big Boss Man. This is now the third album since then and amazingly it doesn’t contain one sample. The talented Nasser plays all instruments (and there’s quite a few) while also producing the whole thing himself on analogue 8 track at his Ramshackle studios. Nick Terry (Klaxons, SMD) took on mixing duties at The Premises, Hackney and we’re left with a fine slab of heavy, groove led psychedelic jazz-funk. Now there’s a mouthful!! Bringing in some extra support to take the sound on tour as a full band, he’s built up a strong following around Europe, especially in France. The albums artwork has a U.F.O morphed on the front and it begins with a spaced out feel welcoming you into its realm with old school type breakbeats and a ‘Talking Synth’. The out of this world feel doesn’t last too long as the craft crashes down around Carnaby Street for some shuffling 60’s Mod vibes. ‘The Champion’ is up on his Myspace site and it’s a JTQ style groover with deep basslines and piercing organ that combines with slapping, rolling bongos and sonic bursts that make you seriously want to move. The guy can really play and he shows his percussion background with some impressive drumming on ‘Rock Me’ and only the irritating sound of a possible donkey lets down another grinding groove, progressing the album superbly. There’s a more gentle approach on the hollow, stomach turning (in a good way!) ‘Lucky Seven’ and again with layered, textured percussion on ‘All Aboard’ which throws in a deep, deep bass with whistling Hammond and comes across really familiar. The fun continues into ‘The Horn’, a spellbinding, funky French style number that keeps things moving along nice and mellow. Then it’s from France to South America later as the Latin feel begins to come across more on ‘Bongo Mambo’, the title says it all really and I’m still amazed that there are no samples on here just ass shaking beats and the best use of a Hammond I’ve heard since The New Mastersounds’ last project. The tongue is firmly in cheek and we could be in an Austin Powers movie with ‘The Wolf’. Head and pant shaking with a bark topping things off quite bizarrely. Scattered Salsa rhythms and rolling bongos take us for a ‘Marimba Down At The Hare’ and he rounds off the album brilliantly upbeat with a stuttering Hammond and more bluesy piano that recalls Film 2007 on ‘The Gospel According To The Bongolian’ It’s a stunning collection of grooves from a talented Londoner who is most definitely keeping the funk alive. I recommend you pick it up and get down! 8 out of 10