The Organ live Review: Alfa 9 at Blow Up Metro Club 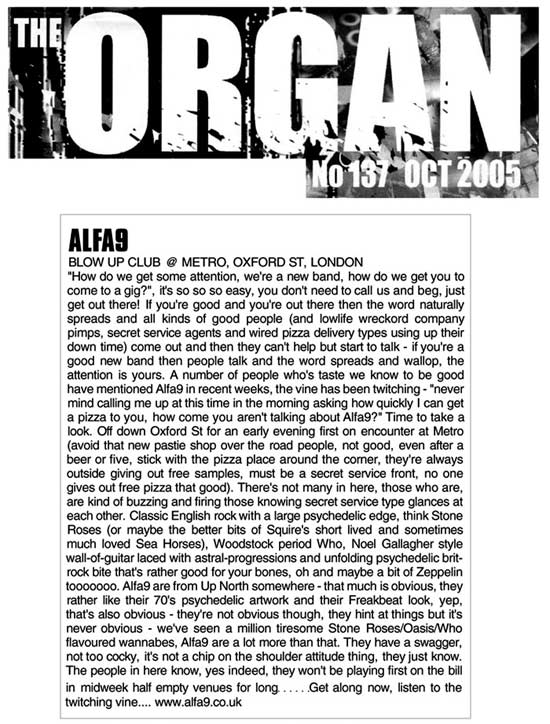 BLOW UP CLUB @ METRO, OXFORD ST, LONDON
A number of people who’s taste we know to be good have mentioned Alfa9 in recent weeks, the vine has been twitching – “never mind calling me up at this time in the morning asking how quickly I can get a pizza to you, how come you aren’t talking about Alfa9?” Time to take a look. Off down Oxford St for an early evening first on encounter at Metro (avoid that new pastie shop over the road people, not good, even after a beer or five, stick with the pizza place around the corner, they’re always outside giving out free samples, must be a secret service front, no one gives out free pizza that good). There’s not many in here, those who are, are kind of buzzing and firing those knowing secret service type glances at each other. Classic English rock with a large psychedelic edge, think Stone Roses (or maybe the better bits of Squire’s short lived and sometimes much loved Sea Horses), Woodstock period Who, Noel Gallagher style wall-of-guitar laced with astral-progressions and unfolding psychedelic britrock bite that’s rather good for your bones, oh and maybe a bit of Zeppelin tooooooo. Alfa9 are from Up North somewhere – that much is obvious, they rather like their 70’s psychedelic artwork and their Freakbeat look, yep, that’s also obvious – they’re not obvious though, they hint at things but it’s never obvious – we’ve seen a million tiresome Stone Roses/Oasis/Who flavoured wannabes, Alfa9 are a lot more than that. They have a swagger, not too cocky, it’s not a chip on the shoulder attitude thing, they just know.
The people in here know, yes indeed, they won’t be playing first on the bill in midweek half empty venues for long Get along now, listen to the twitching vine….