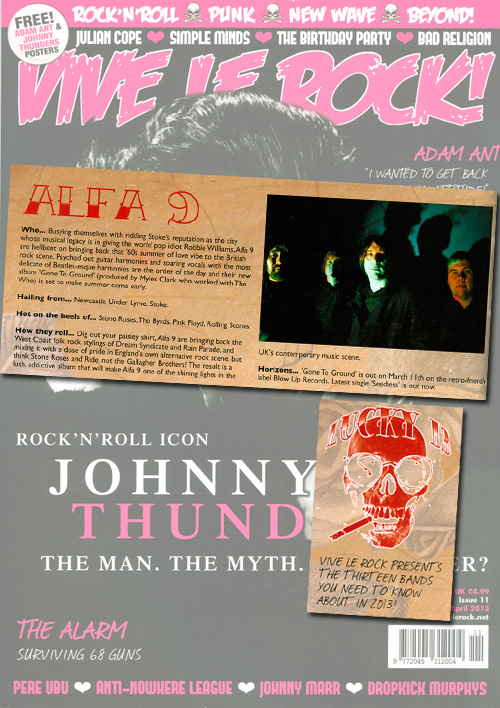 Who… Busying themselves with ridding Stoke’s reputation as the citywhose musical legacy is in giving the world pop idiot Robbie Williams, Alfa 9are hellbent on bringing back that ’60s summer of love vibe to the Britishrock scene. Psyched out guitar harmonies and soaring vocals with the mostdelicate of Beatles-esque harmonies are the order of the day and their newalbum ‘Gone To Ground’ (produced by Myles Clark who worked with TheWho) is set to make summer come early.

Hailing from… Newcastle Under Lyme, Stoke.

How they roll… Dig out your paisley shirt, Alfa 9 are bringing back theWest Coast folk rock stylings of Dream Syndicate and Rain Parade, andmixing it with a dose of pride in England’s own alternative rock scene, but think Stone Roses and Ride, not the Gallagher Brothers! The result is alush, addictive album that will make Alfa 9 one of the shining lights in the UK’s contemporary music scene.

Horizons… ‘Gone To Ground’ is out on March I Ith on the retro-friendlylabel Blow Up Records. Latest single ‘Seedless’ is out now.