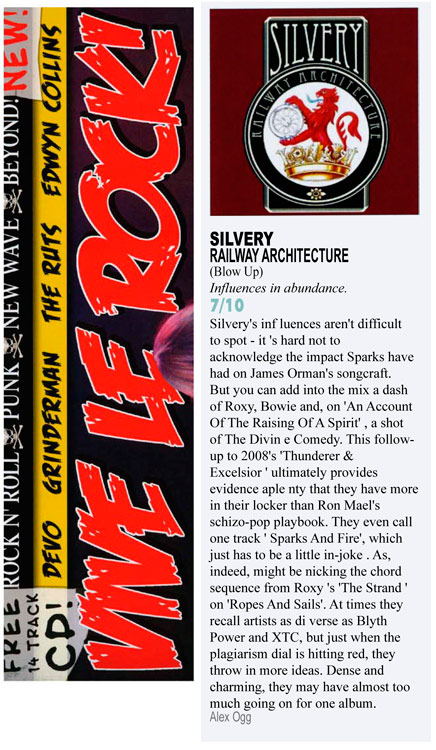 “Silvery’s inf luences aren’t difficult to spot – it ‘s hard not to acknowledge the impact Sparks have had on James Orman’s songcraft. But you can add into the mix a dash of Roxy, Bowie and, on ‘An Account Of The Raising Of A Spirit’ , a shot of The Divin e Comedy. This follow-up to 2008’s ‘Thunderer & Excelsior ‘ ultimately provides evidence aple nty that they have more in their locker than Ron Mael’s schizo-pop playbook. They even call one track ‘ Sparks And Fire’, which just has to be a little in-joke . As, indeed, might be nicking the chord sequence from Roxy ‘s ‘The Strand ‘ on ‘Ropes And Sails’. At times they recall artists as di verse as Blyth Power and XTC, but just when the plagiarism dial is hitting red, they throw in more ideas. Dense and charming, they may have almost too much going on for one album.”