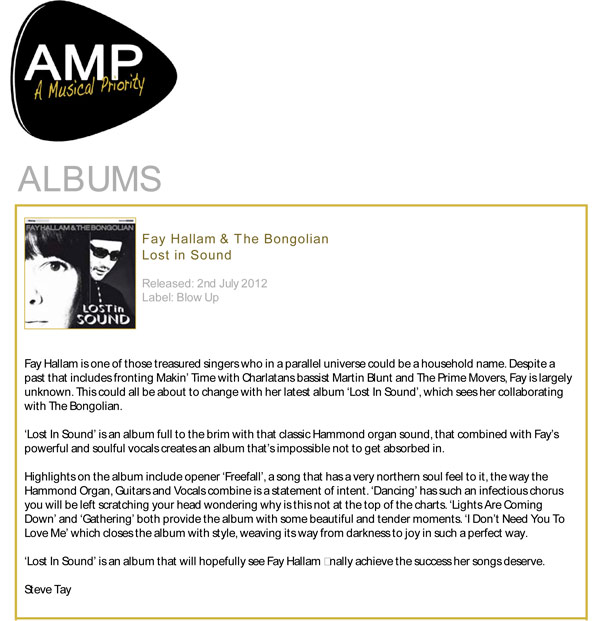 Fay Hallam is one of those treasured singers who in a parallel universe could be a household name. Despite a past that includes fronting Makin’ Time with Charlatans bassist Martin Blunt and The Prime Movers, Fay is largely unknown. This could all be about to change with her latest album ‘Lost In Sound’, which sees her collaborating with The Bongolian. ‘Lost In Sound’ is an album full to the brim with that classic Hammond organ sound, that combined with Fay’s powerful and soulful vocals creates an album that’s impossible not to get absorbed in. Highlights on the album include opener ‘Freefall’, a song that has a very northern soul feel to it, the way the Hammond Organ, Guitars and Vocals combine is a statement of intent. ‘Dancing’ has such an infectious chorus you will be left scratching your head wondering why is this not at the top of the charts. ‘Lights Are Coming Down’ and ‘Gathering’ both provide the album with some beautiful and tender moments. ‘I Don’t Need You To Love Me’ which closes the album with style, weaving its way from darkness to joy in such a perfect way. ‘Lost In Sound’ is an album that will hopefully see Fay Hallam finally achieve the success her songs deserve.