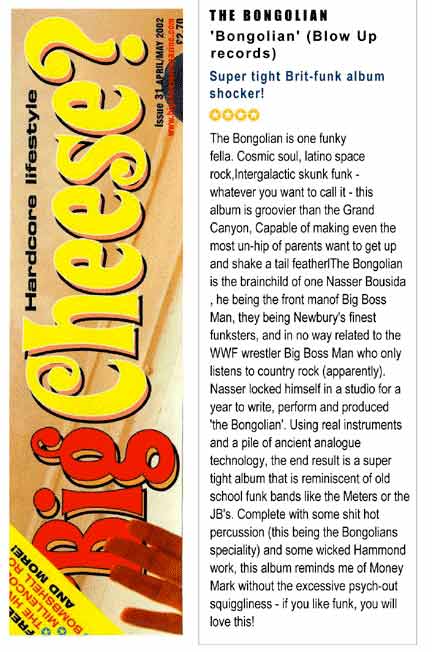 Super tight Brit-funk album shocker! The Bongolian is one funky fella. Cosmic soul, latino space rock,Intergalactic skunk funk whatever you want to call it -this album is groovier than the Grand Canyon, Capable of making even the most un-hip of parents want to get up and shake a tail featherlThe Bongolian is the brainchild of one Nasser Bousida , he being the front manof Big Boss Man, they being Newbury’s finest funksters, and in no way related to the WWF wrestler Big Boss Man who only listens to country rock (apparently). Nasser locked himself in a studio for a year to write, perform and produced ‘the Bongolian’. Using real instruments and a pile of ancient analogue technology, the end result is a super tight album that is reminiscent of old school funk bands like the Meters or the JB’s. Complete with some shit hot percussion (this being the Bongolians speciality) and some wicked Hammond work, this album reminds me of Money Mark without the excessive psych-out squiggliness -if you like funk, you will love this! 4 STARS