Home / Press / Scootering Album Of The Month The Bongolian

Scootering Album Of The Month The Bongolian 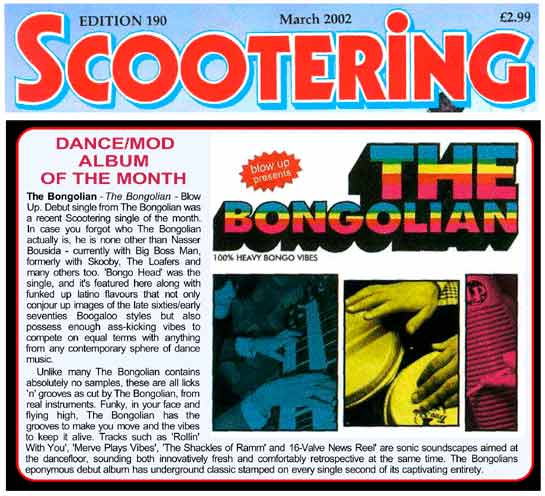 Debut single from The Bongolian was a recent Scootering single of the month. In case you forgot who The Bongolian actually is, he is none other than Nasser Bousida currently with Big Boss Man, formerly with Skooby, The Loafers and many others too. ‘Bongo Head’ was the single, and it’s featured here along with funked up latino flavours that not only conjour up images of the late sixties/early seventies Boogaloo styles but also possess enough ass-kicking vibes to compete on equal terms with anything from any contemporary sphere of dance music. Unlike many The Bongolian contains absolutely no samples, these are all licks ‘n’ grooves as cut by The Bongolian, from real instruments. Funky, in your face and flying high, The Bongolian has the grooves to make you move and the vibes to keep it alive. Tracks such as ‘Rollin’ With You’, ‘Merve Plays Vibes’, ‘The Shackles of Ramm’ and 16-Valve News Reel’ are sonic soundscapes aimed at the dancefloor, sounding both innovatively fresh and comfortably retrospective at the same time. The Bongolians eponymous debut album has underground classic stamped on every single second of its captivating entirety.