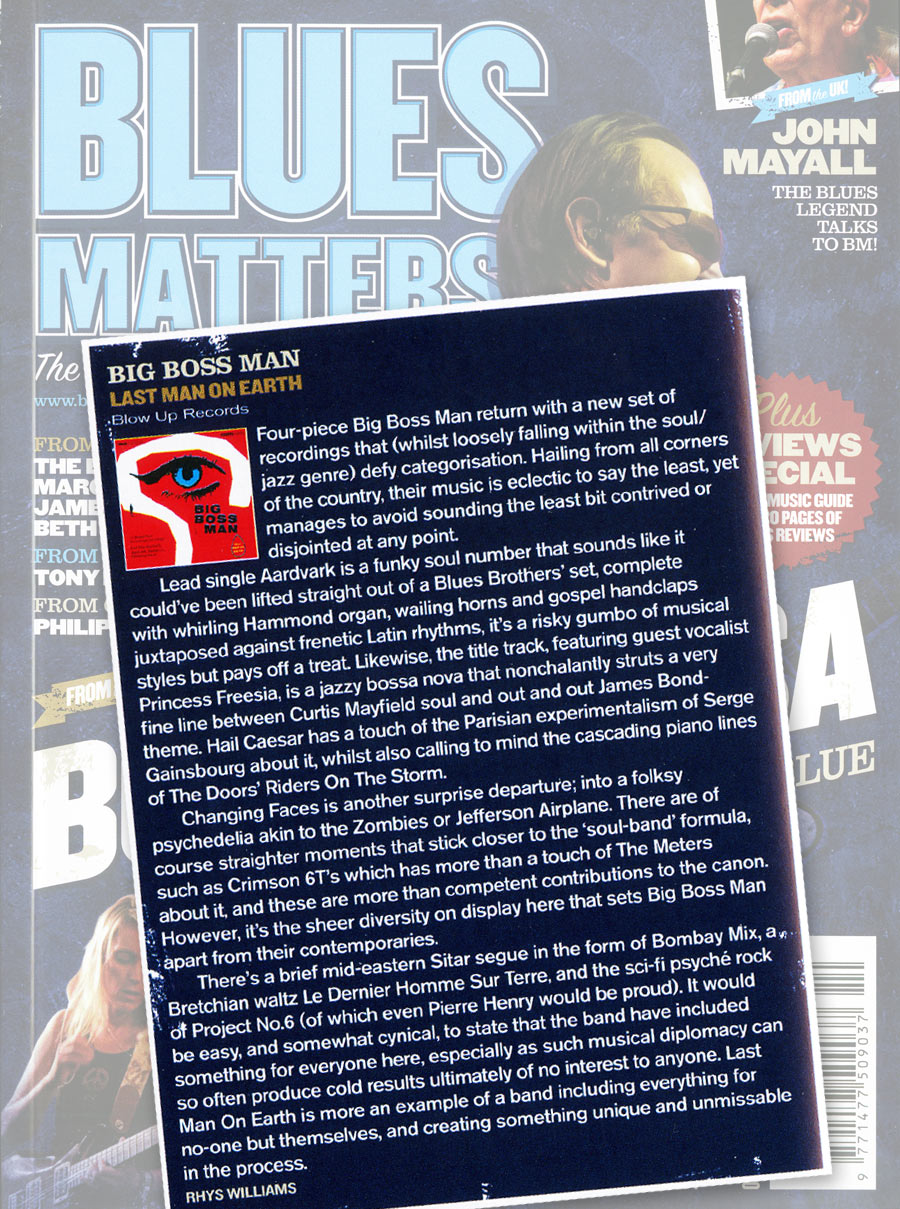 Four-piece Big Boss Man return with a new set of recordings that (whilst loosely falling within the soul/jazz genre) defy categorisation. Hailing from all corners of the country, their music is eclectic to say the least, yet manages to avoid sounding the least bit contrived or disjointed at any point

Lead single Aardvark is a funky soul number that sounds like it could’ve been lifted straight out of a Blues Brothers’ set complete with whirling Hammond organ, wailing horns and gospel handclaps juxtaposed against frenetic Latin rhythms, it’s a risky gumbo of musical styles but pays off a treat Likewise, the title track, featuring guest vocalist Princess Freesia, is a jazzy bossa nova that nonchalantly struts a very
fine line between Curtis Mayfield soul and out and out James Bondtheme. Hail Caesar has a touch of the Parisian experimentalism of Serge
Gainsbourg about it whilst also calling to mind the cascading piano lines of The Doors’ Riders On The Storm.

Changing Faces is another surprise departure; into a folksy psychedelia akin to the Zombies or Jefferson Airplane. There are of
course straighter moments that stick closer to the ‘soul-band’ formula, such as Crimson 6T’s which has more than a touch of The Meters
about it and these are more than competent contributions to the canon. However, it’s the sheer diversity on display here that sets Big Boss Man
apart from their contemporaries.

There’s a brief mid-eastern Sitar segue in the form of Bombay Mix, a Bretchian waltz Le Dernier Homme Sur Terre, and the sci-fi psyche rock
of Project No.6 (of which even Pierre Henry would be proud). It would be easy, and somewhat cynical, to state that the band have included
something for everyone here, especially as such musical diplomacy can so often produce cold results ultimately of no interest to anyone. Last
Man On Earth is more an example of a band including everything for no-one but themselves, and creating something unique and unmissable
in the process.