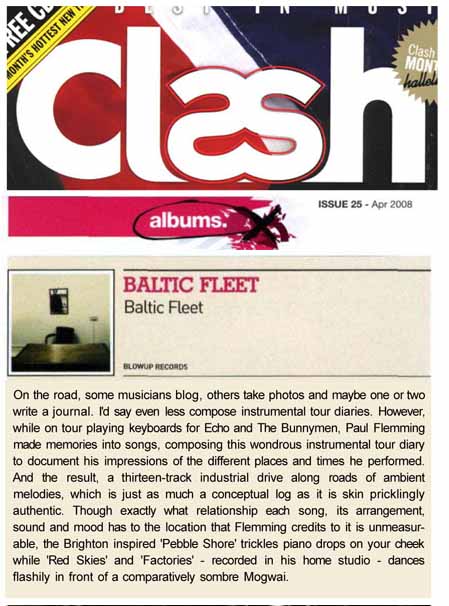 On the road, some musicians blog, others take photos and maybe one or two
write a journal. I’d say even less compose instrumental tour diaries. However,
while on tour playing keyboards for Echo and The Bunnymen, Paul Flemming
made memories into songs, composing this wondrous instrumental tour diary
to document his impressions of the different places and times he performed.
And the result, a thirteen-track industrial drive along roads of ambient
melodies, which is just as much a conceptual log as it is skin pricklingly
authentic. Though exactly what relationship each song, its arrangement,
sound and mood has to the location that Flemming credits to it is unmeasurable,
the Brighton inspired ‘Pebble Shore’ trickles piano drops on your cheek
while ‘Red Skies’ and ‘Factories’ – recorded in his home studio – dances
flashily in front of a comparatively sombre Mogwai.