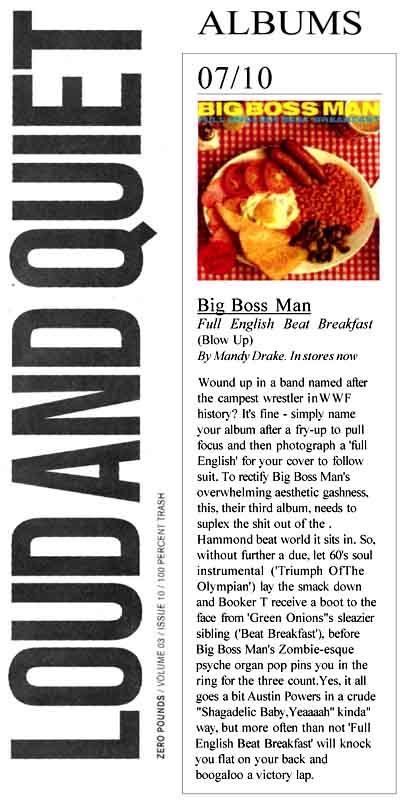 Wound up in a band named after the campest wrestler in WWF history? It’s fine – simply name your album after a fry-up to pull focus and then photograph a ‘full
English’ for your cover to follow suit. To rectify Big Boss Man’s overwhelming aesthetic gashness, this, their third album, needs to suplex the sh*t out of the . Hammond beat world it sits in. So, without further a due, let 60’s soul instrumental (‘Triumph Of The
Olympian’) lay the smack down and Booker T receive a boot to the face from ‘Green Onions”s sleazier sibling (‘Beat Breakfast’), before Big Boss Man’s Zombie-esque
psyche organ pop pins you in the ring for the three count.Yes, it all goes a bit Austin Powers in a crude “Shagadelic Baby,Yeaaaah” kinda” way, but more often than not ‘Full English Beat Breakfast’ will knock you flat on your back and boogaloo a victory lap.