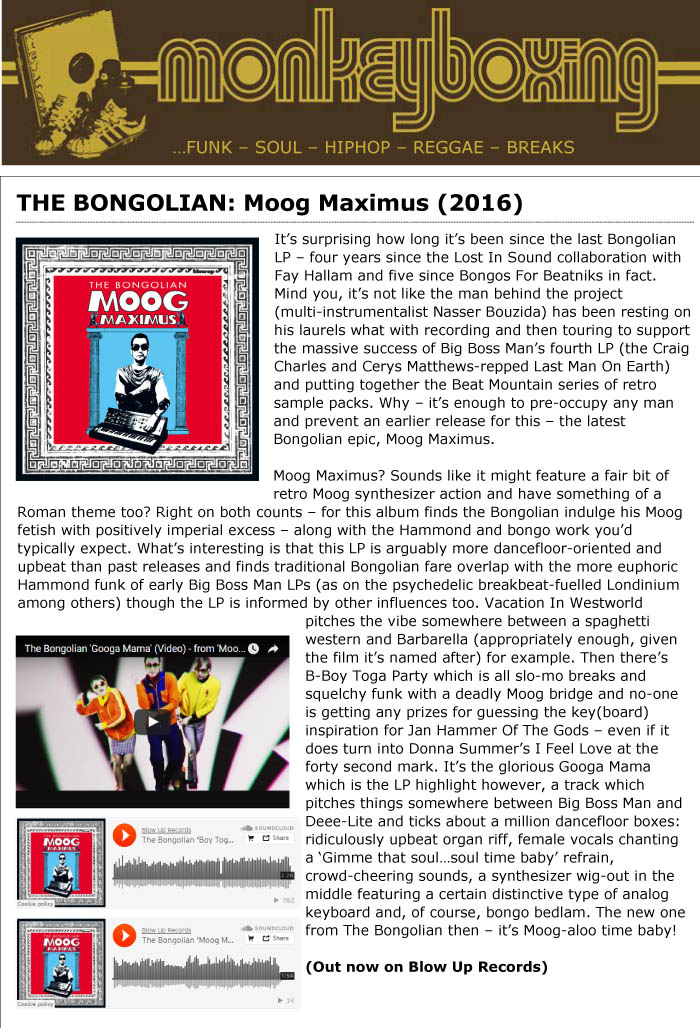 It’s surprising how long it’s been since the lastBongolian LP – four years since the Lost In Soundcollaboration with Fay Hallam and five since Bongos For Beatniks in fact. Mind you, it’s not like the man behind the project (multi-instrumentalist Nasser Bouzida) has been resting on his laurels what with recording and then touring to support the massive success of Big Boss Man’s fourth LP (the Craig Charles and Cerys Matthews-repped Last Man On Earth) and putting together the Beat Mountainseries of retro sample packs. Why – it’s enough to pre-occupy any man and prevent an earlier release for this – the latest Bongolian epic, Moog Maximus.

Moog Maximus? Sounds like it might feature a fair bit of retro Moog synthesizer action and have something of a Roman theme too? Right on both counts – for this album finds the Bongolian indulge his Moog fetish with positively imperial excess – along with the Hammond and bongo work you’d typically expect. What’s interesting is that this LP is arguably more dancefloor-oriented and upbeat than past releases and finds traditional Bongolian fare overlap with the more euphoric Hammond funk of early Big Boss Man LPs (as on the psychedelic breakbeat-fuelled Londinium among others) though the LP is informed by other influences too. Vacation In Westworld pitches the vibe somewhere between a spaghetti western and Barbarella (appropriately enough, given the film it’s named after) for example. Then there’s B-Boy Toga Party which is all slo-mo breaks and squelchy funk with a deadly Moog bridge and no-one is getting any prizes for guessing the key(board) inspiration for Jan Hammer Of The Gods – even if it does turn into Donna Summer’s I Feel Love at the forty second mark. It’s the gloriousGooga Mama which is the LP highlight however, a track which pitches things somewhere between Big Boss Man and Deee-Lite and ticks about a million dancefloor boxes: ridiculously upbeat organ riff, female vocals chanting a ‘Gimme that soul…soul time baby’ refrain, crowd-cheering sounds, a synthesizer wig-out in the middle featuring a certain distinctive type of analog keyboard and, of course, bongo bedlam. The new one from The Bongolian then – it’s Moog-aloo time baby!
(Out now on Blow Up Records