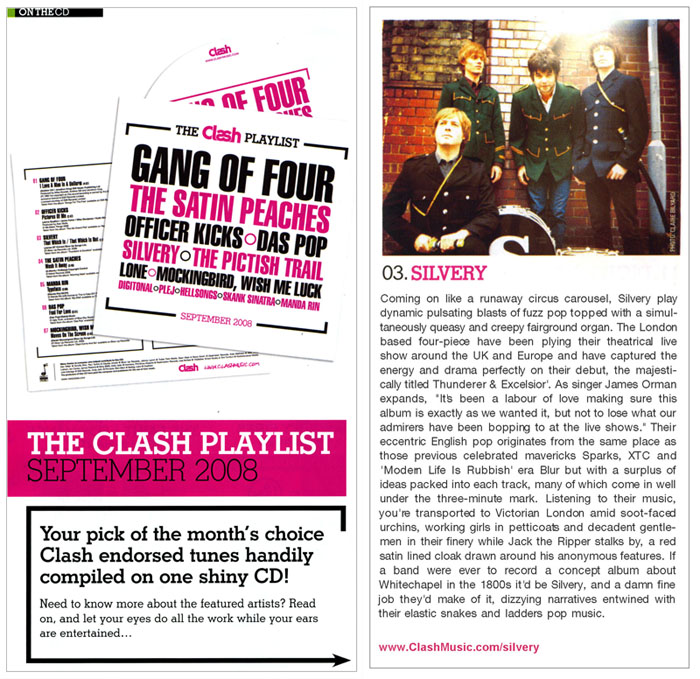 “Coming on like a runaway circus carousel, Silvery play dynamic pulsating blasts of fuzz pop topped with a simul-taneously queasy and creepy fairground organ. The London based four-piece have been plying their theatrical live show around the UK and Europe and have captured the energy and drama perfectly on their debut, the majesti-cally titled Thunderer & Excelsior’. As singer James Orman expands, “”It’s been a labour of love making sure this album is exactly as we wanted it, but not to lose what our admirers have been bopping to at the live shows.”” Their eccentric English pop originates from the same place as those previous celebrated mavericks Sparks, XTC and ‘Modern Life Is Rubbish’ era Blur but with a surplus of ideas packed into each track, many of which come in well under the three-minute mark. Listening to their music, you’re transported to Victorian London amid soot-faced urchins, working girls in petticoats and decadent gentle-men in their finery while Jack the Ripper stalks by, a red satin lined cloak drawn around his anonymous features. If a band were ever to record a concept album about Whitechapel in the 1800s it’d be Silvery, and a damn fine job they’d make of it, dizzying narratives entwined with their elastic snakes and ladders pop music.”