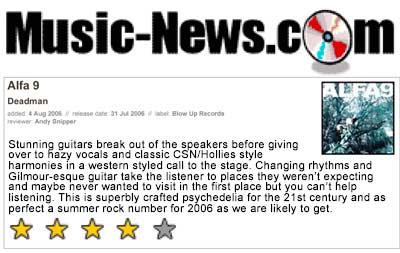 Stunning guitars break out of the speakers before giving over to hazy vocals and classic CSN/Hollies style harmonies in a western styled call to the stage. Changing rhythms and Gilmour-esque guitar take the listener to places they weren’t expecting and maybe never wanted to visit in the first place but you can’t help listening. This is superbly crafted psychedelia for the 21st century and as perfect a summer rock number for 2006 as we are likely to get. 4/5 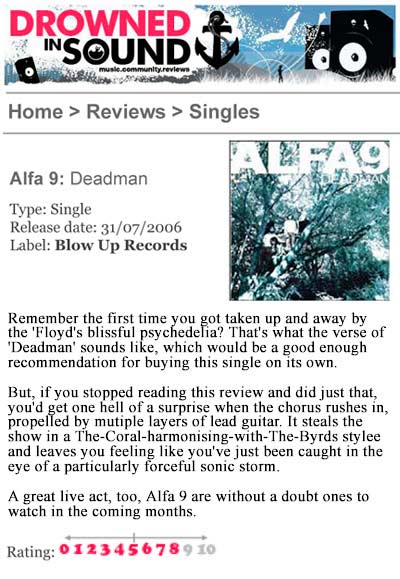 Remember the first time you got taken up and away by the ‘Floyd’s blissful psychedelia? That’s what the verse of ‘Deadman’ sounds like, which would be a good enough recommendation for buying this single on its own.
But, if you stopped reading this review and did just that, you’d get one hell of a surprise when the chorus rushes in, propelled by mutiple layers of lead guitar. It steals the show in a The-Coral-harmonising-with-The-Byrds stylee and leaves you feeling like you’ve just been caught in the eye of a particularly forceful sonic storm.
A great live act, too, Alfa 9 are without a doubt ones to watch in the coming months. 8/10

Clash Magazine Alfa 9 Then We Begin

Recorded in The Charlatans’ Big Mushroom studio, Alfa9’s debut is a confident, elaborate trip through forty years of psychedelic rock. Having gigged across the country since their inception four years ago, Alfa9 have channelled everything into a definitive debut and produced a stunningly complete piece of music. Like most bands from outside one of the major music centres, they have found it hard getting noticed but rather than complain they just got their heads down and gigged and gigged. Given the reputation of their live shows as full on ‘happenings’ complete witha frazzled lightshow, it is easy to see why they have succeeded in breaking into the national circuit. Book-ended by instrumentals and boasting no less than three interludes shows the confidence they have in their material and the time their fans will invest in the music. A fully realised and hugely ambitious debut which succeeds on every level 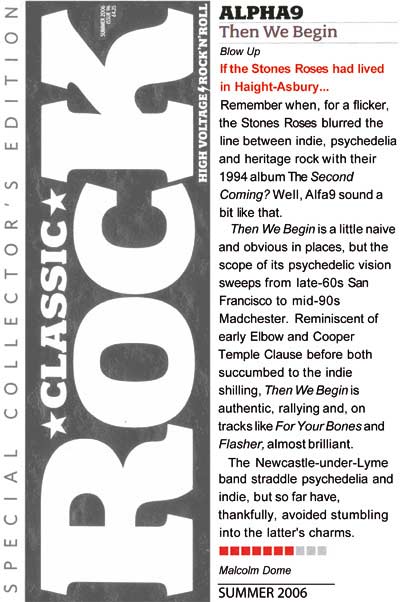 If the Stones Roses had lived in Haight-Asbury…
Remember when, for a flicker, the Stones Roses blurred the line between indie, psychedelia and heritage rock with their 1994 album The Second Coming? Well, Alfa9 sound a bit like that.
Then We Begin is a little naive and obvious in places, but the scope of “its psychedelic vision sweeps from late-60s San Francisco to mid-90s Manchester”. Reminiscent of early Elbow and Cooper Temple Clause before both succumbed to the indie shilling. Then We Begin is authentic, rallying and, on tracks like For Your Bones and Flasher, almost brilliant.
The Newcastle-under-Lyme band straddle psychedelia and indie, but so far have, thankfully, avoided stumbling into the latter’s charms.