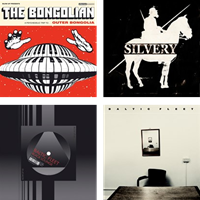 2008 is set to be the most release-packed year yet for Blow Up with several new projects from 2007 being wrapped up and set for release, including The Bongolian‘s 3rd album & debuts from new signings Baltic Fleet & Silvery:

3rd mar 2008
SILVERY – Horrors / Orders
Silvery release their limited debut 45 ‘Horrors’/’Orders’ as a taste of their forthcoming debut album (late Spring 2008). Its a double A-sided blast of infectious eccentric British pop, and with first track ‘Horrors’ coming in at 1’47 it’s not long before you’ll be wanting to play again. The single which has aready had more than one spin by BBC’s Steve Lamacq, and this week won Zane Lowe’s Fresh Meat contest on BBC Radio 1.
‘Horrors’ is accompanied by a brilliant animated video by Alasdair Brotherson.
Read more

10th mar 2008
BALTIC FLEET– Baltic Fleet
Whilst on a World Tour playing keyboards for Echo & The Bunnymen, Liverpool-based artist Paul Fleming began to write what would come to be his debut album ‘Baltic Fleet‘. With a laptop and any instruments that were to hand he would capture, in music, what inspired him in each city around the world, and a sound was born influenced by artists such as Eno, The Doves, NEU!, Sigur Ros and DJ Shadow. Read more