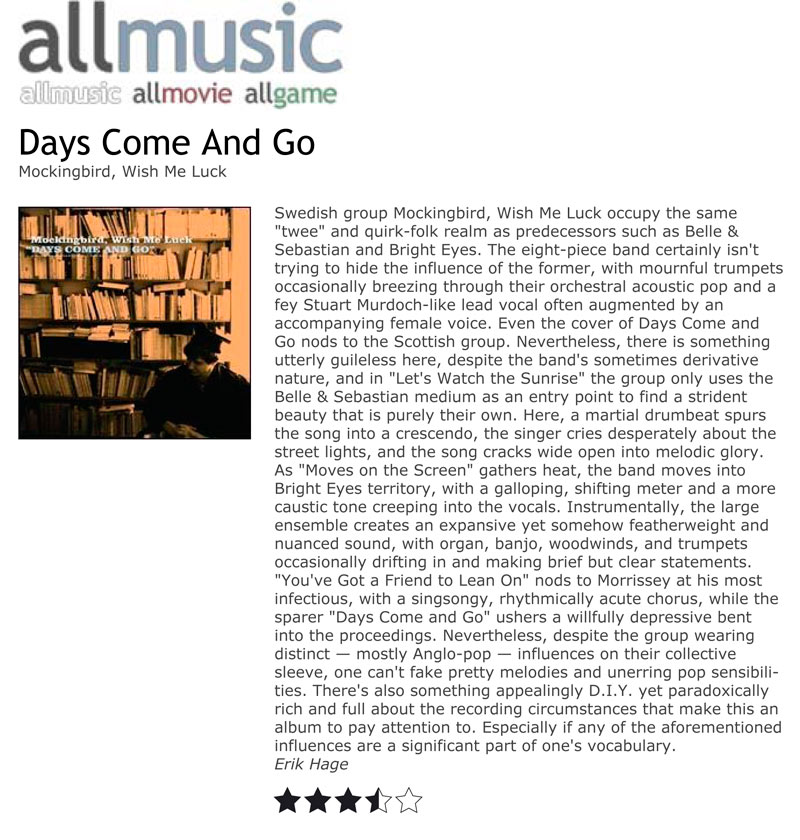 Swedish group Mockingbird, Wish Me Luck occupy the same ‘twee’ and quirk-folk realm as predecessors such as Belle & Sebastian and Bright Eyes. The eight-piece band certainly isn’t trying to hide the influence of the former, with mournful trumpets occasionally breezing through their orchestral acoustic pop and a fey Stuart Murdoch-like lead vocal often augmented by an accompanying female voice. Even the cover of Days Come and Go nods to the Scottish group. Nevertheless, there is something utterly guileless here, despite the band’s sometimes derivative nature, and in ‘Let’s Watch the Sunrise’ the group only uses the Belle & Sebastian medium as an entry point to find a strident beauty that is purely their own. Here, a martial drumbeat spurs the song into a crescendo, the singer cries desperately about the street lights, and the song cracks wide open into melodic glory. As ‘Moves on the Screen’ gathers heat, the band moves into Bright Eyes territory, with a galloping, shifting meter and a more caustic tone creeping into the vocals. Instrumentally, the large ensemble creates an expansive yet somehow featherweight and nuanced sound, with organ, banjo, woodwinds, and trumpets occasionally drifting in and making brief but clear statements. ‘You’ve Got a Friend to Lean On’ nods to Morrissey at his most infectious, with a singsongy, rhythmically acute chorus, while the sparer ‘Days Come and Go’ ushers a willfully depressive bent into the proceedings. Nevertheless, despite the group wearing distinct – mostly Anglo-pop – influences on their collective sleeve, one can’t fake pretty melodies and unerring pop sensibili-ties. There’s also something appealingly D.I.Y. yet paradoxically rich and full about the recording circumstances that make this an album to pay attention to. Especially if any of the aforementioned influences are a significant part of one’s vocabulary.

What's On The NME Stereo Silvery You Give A Little Love

“Never before has a song from Bugsy Malone sounded so… er, cool?!” 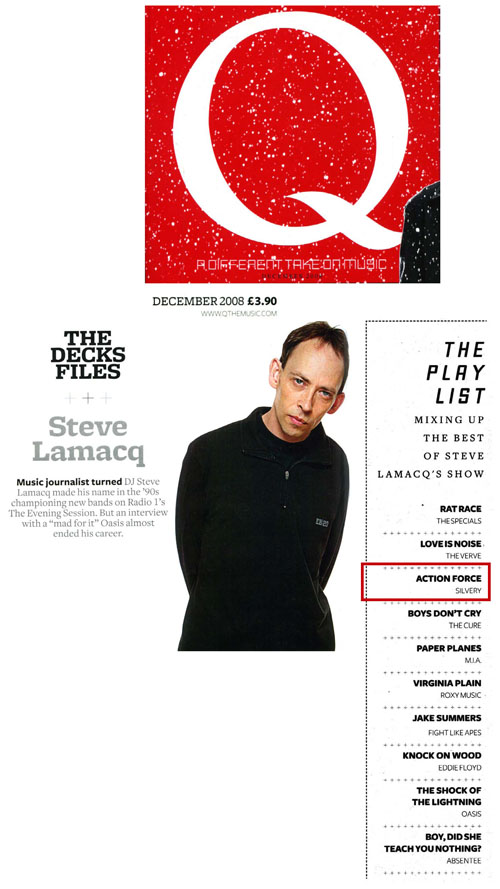 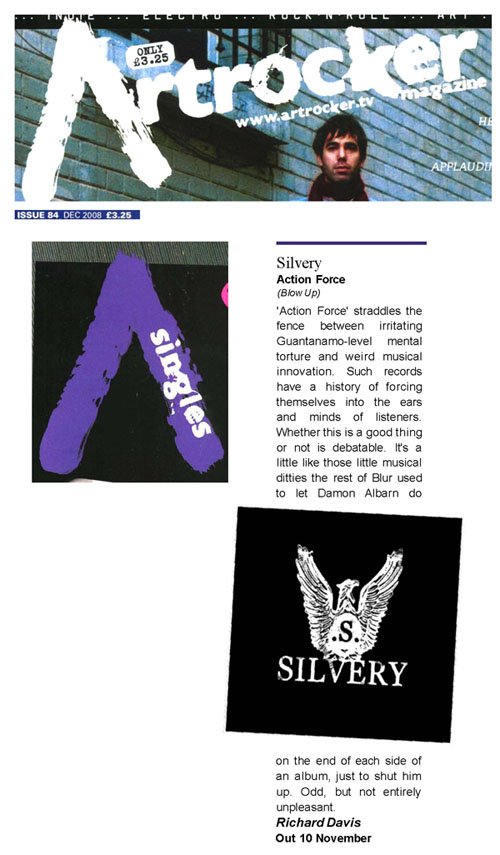 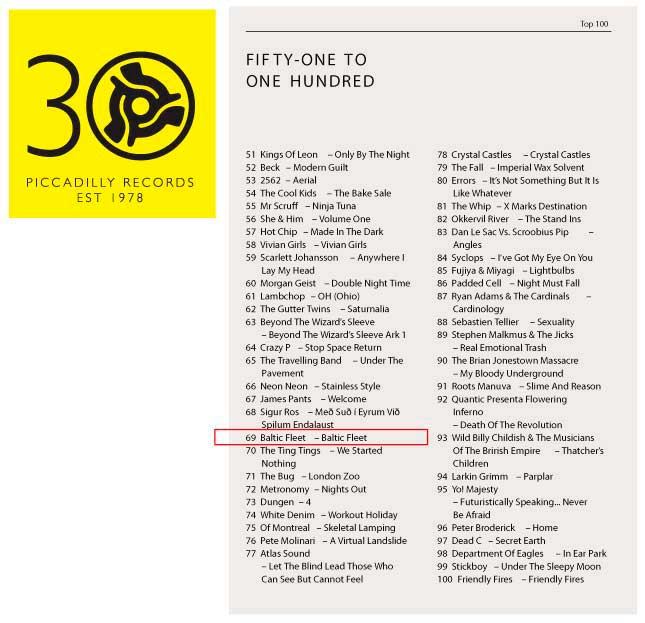 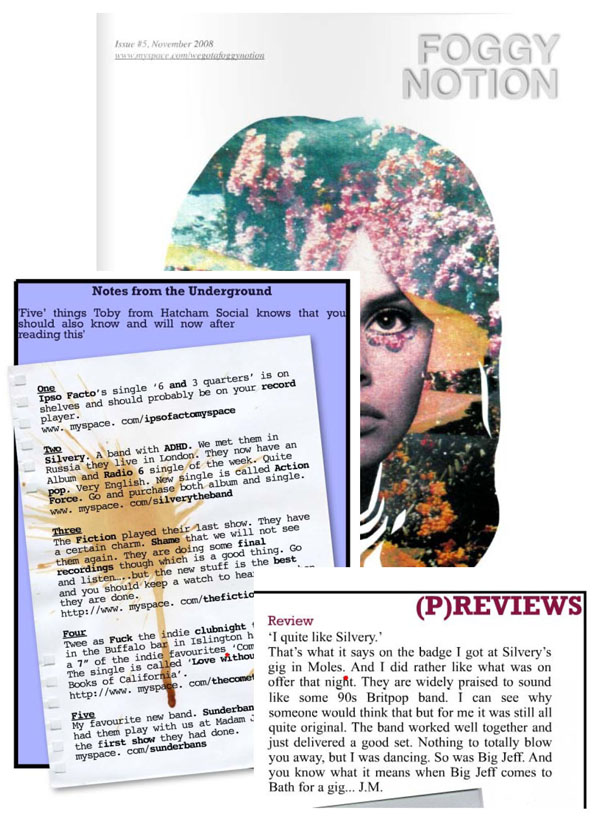 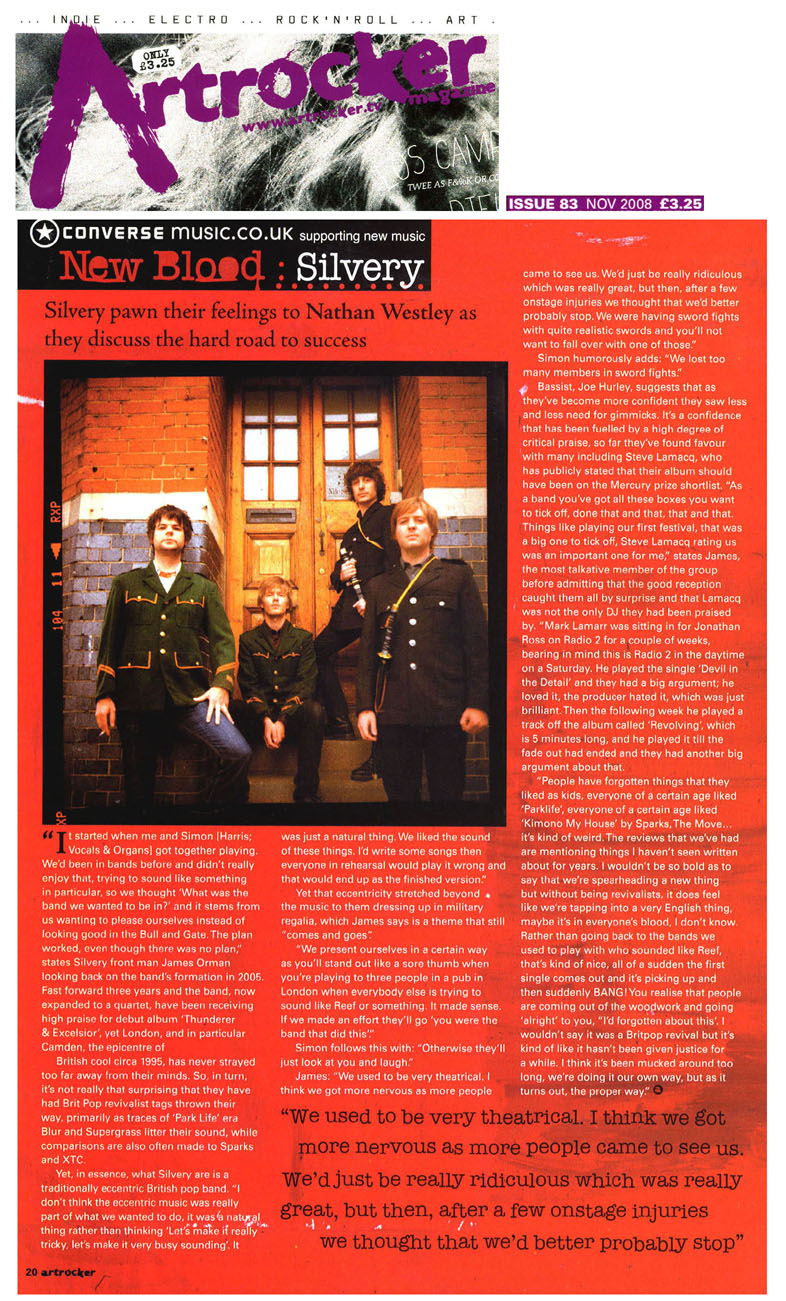 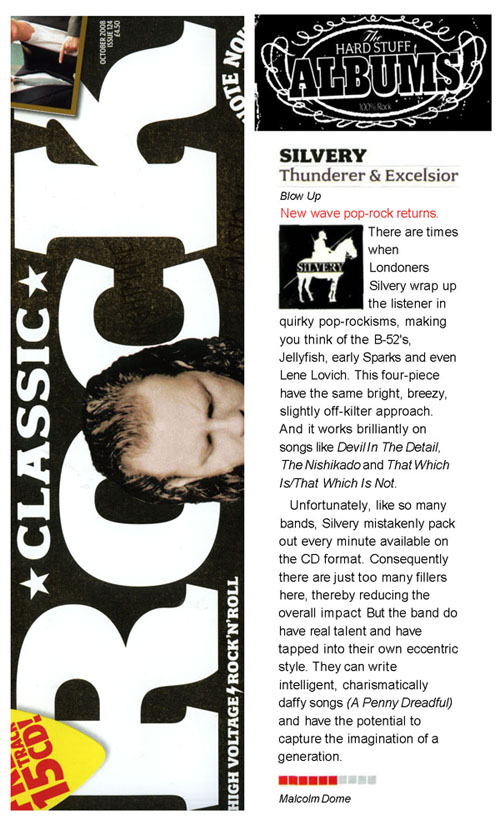 “New wave pop-rock returns. There are times when Londoners Silvery wrap up the listener in quirky pop-rockisms, making you think of the B-52’s, Jellyfish, early Sparks and even Lene Lovich. This four-piece have the same bright, breezy, slightly off-kilter approach. And it works brilliantly on songs like Devil In The Detail, The Nishikado and That Which Is/That Which Is Not. Unfortunately, like so many bands, Silvery mistakenly pack out every minute available on the CD format. Consequently there are just too many fillers here, thereby reducing the overall impact But the band do have real talent and have tapped into their own eccentric style. They can write intelligent, charismatically daffy songs (A Penny Dreadful) and have the potential to capture the imagination of a generation.”