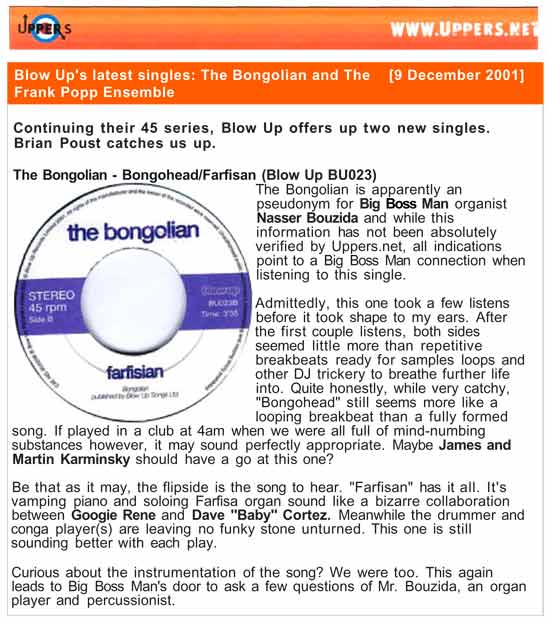 The Bongolian is apparently an pseudonym for Big Boss Man organist Nasser Bouzida and while this information has not been absolutely verified by Uppers.net, all indications point to a Big Boss Man connection when listening to this single. Admittedly, this one took a few listens before it took shape to my ears. After the first couple listens, both sides seemed little more than repetitive breakbeats ready for samples loops and other DJ trickery to breathe further life into. Quite honestly, while very catchy, “”Bongohead”” still seems more like a looping breakbeat than a fully formed song. If played in a club at 4am when we were all full of mind-numbing substances however, it may sound perfectly appropriate. Maybe James and Martin Karminsky should have a go at this one? Be that as it may, the flipside is the song to hear. “”Farfisan”” has it all. It’s vamping piano and soloing Farfisa organ sound like a bizarre collaboration between Googie Rene and Dave “”Baby”” Cortez. Meanwhile the drummer and conga player(s) are leaving no funky stone unturned. This one is still sounding better with each play. Curious about the instrumentation of the song? We were too. This again leads to Big Boss Man’s door to ask a few questions of Mr. Bouzida, an organ player and percussionist. 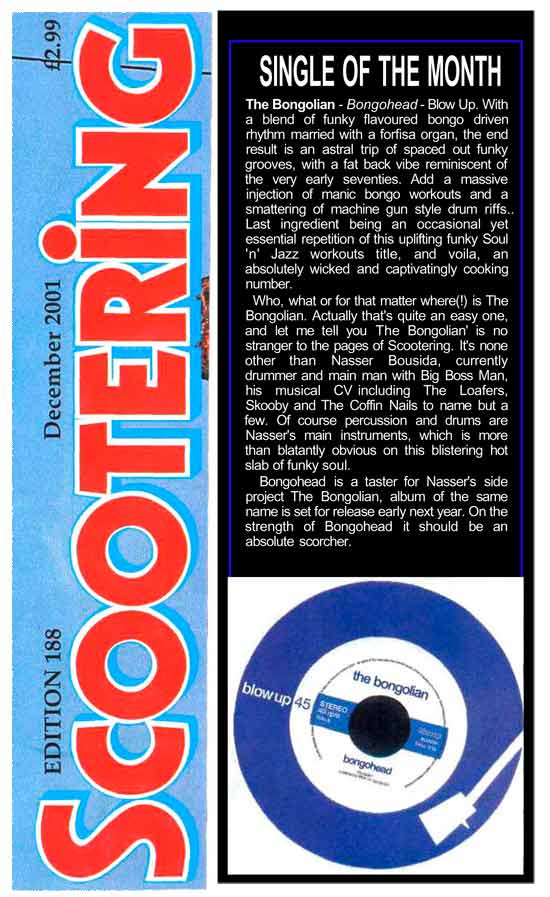 Scootering Scootering 'Single Of The Month' The Bongolian

The Bongolian Bongohead Blow Up. With a blend of funky flavoured bongo driven rhythm married with a forfisa organ, the end result is an astral trip of spaced out funky grooves, with a fat back vibe reminiscent of the very early seventies. Add a massive injection of manic bongo workouts and a smattering of machine gun style drum riffs.. Last ingredient being an occasional yet essential repetition of this uplifting funky Soul ‘n Jazz workouts title, and voila, an absolutely wicked and captivatingly cooking number. Who, what or for that matter where(!) is The Bongolian. Actually that’s quite an easy one, and let me tell you The Bongolian is no stranger to the pages of Scootering. It’s none other than Nasser Bousida, currently drummer and main man with Big Boss Man, his musical CV including The Loafers, Skooby and The Coffin Nails to name but a few. Of course percussion and drums are Nasser’s main instruments, which is more than blatantly obvious on this blistering hot slab of funky soul. Bongohead is a taster for Nasser’s side project The Bongolian, album of the same name is set for release early next year. On the strength of Bongohead it should be an absolute scorcher. 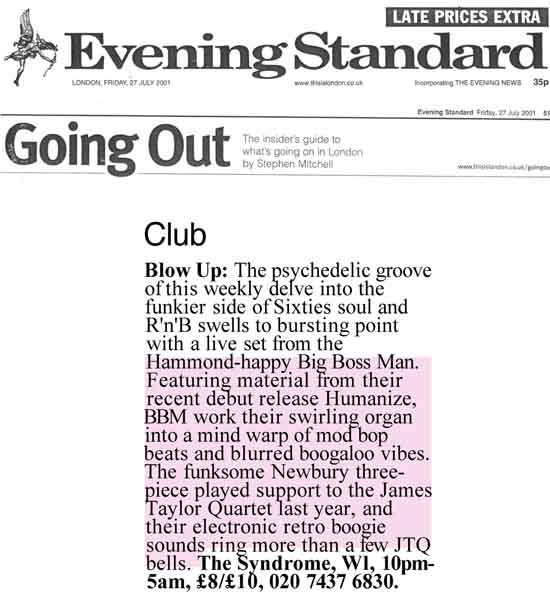 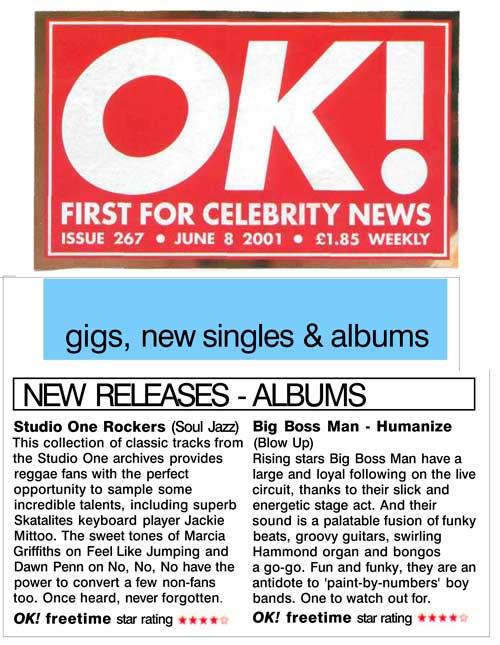 Rising stars Big Boss Man have a large and loyal following on the live circuit, thanks to their slick and energetic stage act. And their sound is a palatable fusion of funky beats, groovy guitars, swirling Hammond organ and bongos a go-go. Fun and funky, they are an antidote to ‘paint-by-numbers’ 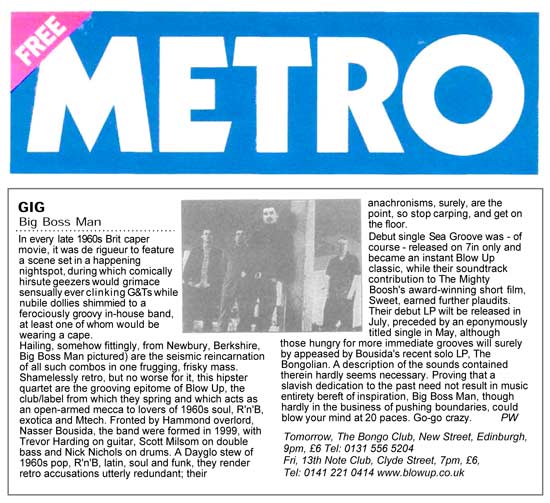 In every late 1960s Brit capermovie, it was de rigueur to featurea scene set in a happeningnightspot, during which comicallyhirsute geezers would grimacesensually ever clinking G&Ts whilenubile dollies shimmied to aferociously groovy in-house band,at least one of whom would bewearing a cape.Hailing, somehow fittingly, from Newbury, Berkshire,Big Boss Man pictured) are the seismic reincarnationof all such combos in one frugging, frisky mass.Shamelessly retro, but no worse for it, this hipsterquartet are the grooving epitome of Blow Up, theclub/label from which they spring and which acts asan open-armed mecca to lovers of 1960s soul, R’n’B,exotica and Mtech. Fronted by Hammond overlord,Nasser Bousida, the band were formed in 1999, withTrevor Harding on guitar, Scott Milsom on doublebass and Nick Nichols on drums. A Dayglo stew of1960s pop, R’n’B, latin, soul and funk, they renderretro accusations utterly redundant; theiranachronisms, surely, are thepoint, so stop carping, and get onthe floor.Debut single Sea Groove was – ofcourse – released on 7in only andbecame an instant Blow Upclassic, while their soundtrackcontribution to The MightyBoosh’s award-winning short film,Sweet, earned further plaudits.Their debut LP wilt be released inJuly, preceded by an eponymouslytitled single in May, althoughthose hungry for more immediate grooves will surelyby appeased by Bousida’s recent solo LP, TheBongolian. A description of the sounds containedtherein hardly seems necessary. Proving that aslavish dedication to the past need not result in musicentirety bereft of inspiration, Big Boss Man, thoughhardly in the business of pushing boundaries, couldblow your mind at 20 paces. Go-go crazy. PW 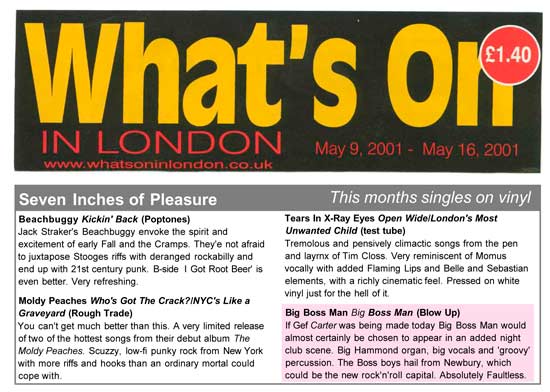 If Gef Carter was being made today Big Boss Man wouldalmost certainly be chosen to appear in an added nightclub scene. Big Hammond organ, big vocals and ‘groovy’percussion. The Boss boys hail from Newbury, whichcould be the new rock’n’roll capital. Absolutely Faultless. 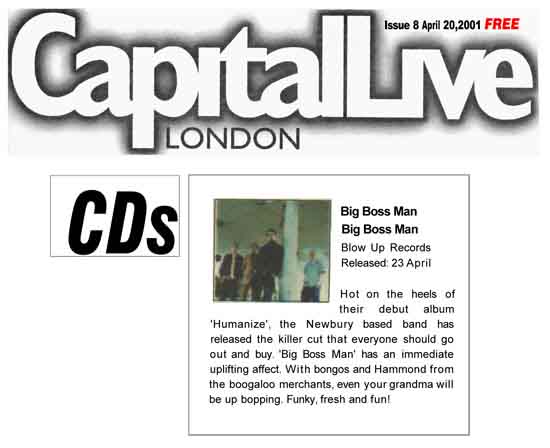 Hot on the heels of their debut album, [Big Boss Man] has released the killer cut that everyone should go out and buy. ‘Big Boss Man’ has an immediate uplifting affect. With bongos and Hammond from the boogaloo merchants, even you grandma will be up bopping. Funky, fresh and fun! 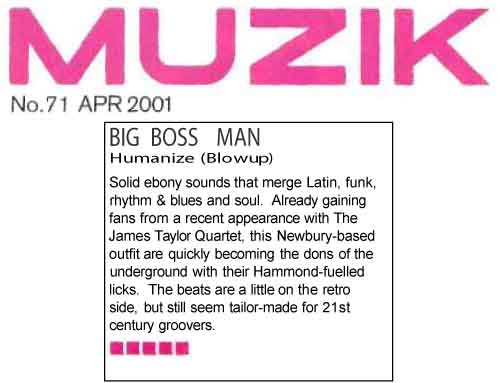 Solid ebony sounds that merge Latin, funk, rhythm & blues and soul. Already gaining
fans from a recent appearance with The James Taylor Quartet, this Newbury-based
outfit are quickly becoming the dons of the underground with their Hammond-fuelled
licks. The beats are a little on the retro side, but still seem tailor-made for 21st century groovers. 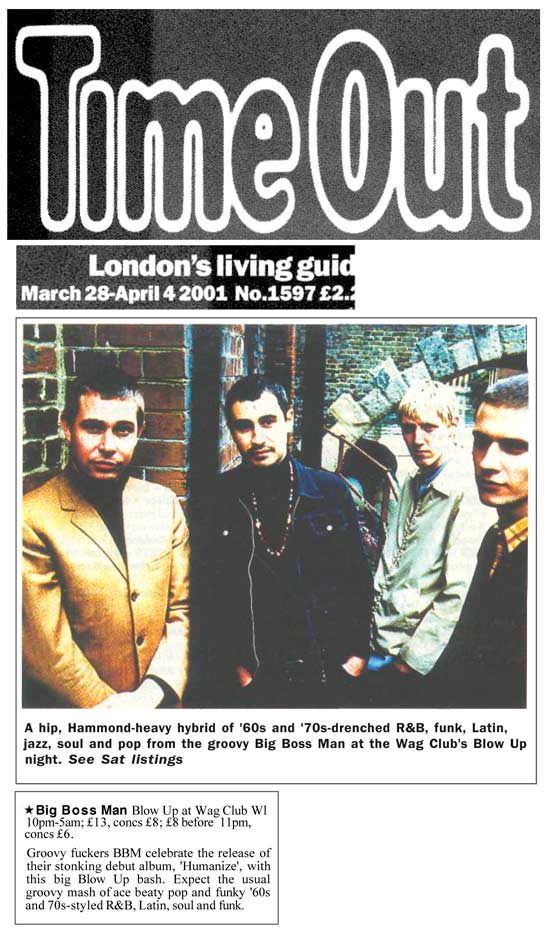 A hip, Hammond-heavy hybrid of ’60s and ’70s-drenched R&B, funk, Latin, jazz, soul and pop from the groovy Big Boss Man at the Wag Club’s Blow Up night. 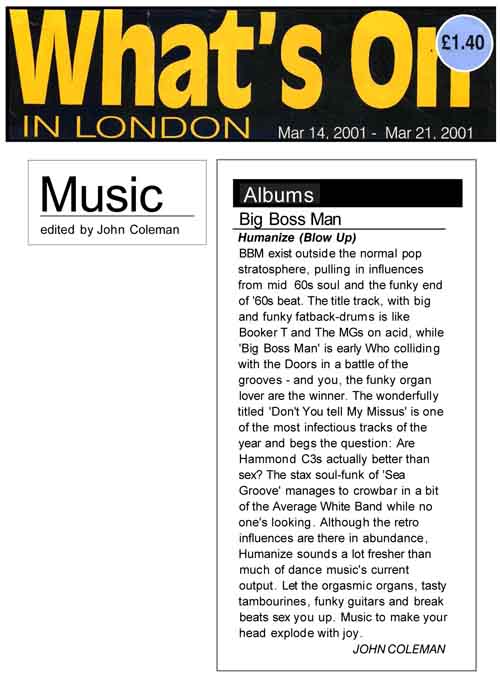 BM exist outside the normal popstratosphere, pulling in influencesfrom mid 60s soul and the funky endof ’60s beat. The title track, with bigand funky fatback-drums is likeBooker T and The MGs on acid, while’Big Boss Man’ is early Who collidingwith the Doors in a battle of thegrooves – and you, the funky organlover are the winner. The wonderfullytitled ‘Don’t You tell My Missus’ is oneof the most infectious tracks of theyear and begs the question: AreHammond C3s actually better thansex? The stax soul-funk of ‘SeaGroove’ manages to crowbar in a bitof the Average White Band while noone’s looking. Although the retroinfluences are there in abundance,Humanize sounds a lot fresher thanmuch of dance music’s currentoutput. Let the orgasmic organs, tastytambourines, funky guitars and breakbeats sex you up. Music to make yourhead explode with joy.