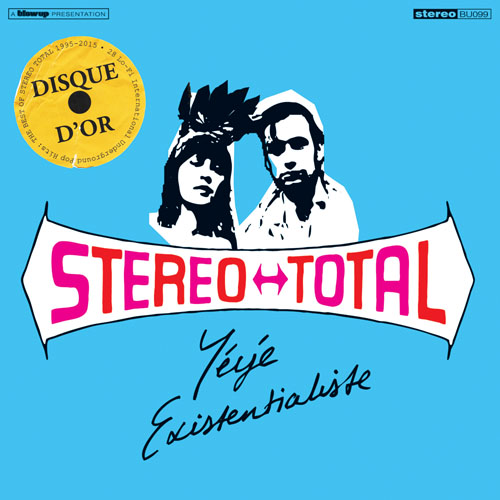 Blow Up presents Yéyé Existentialiste – a compilation of the recording highlights of one of the world’s greatest exponents of lo-fi pop – Stereo Total.

Stereo Total is the Berlin based French-German duo Françoise Cactus and Brezel Göring, whose playful eclectic music incorporates anything from New Wave, Pop Electronique, 60’s French pop mashed up with trashy garage Punk Rock and Disco to form the band’s distinctive sound:“We’ve got a special sense of aesthetic. Cheap and cheesy, but still cool and chic.”

‘Yéyé Existentialiste‘ has been compiled by Paul Tunkin in conjunction with Cactus and Brezel for Blow Up Records. Stereo Total were always a favourite act to book for Tunkin who has promoted shows with the band in London since the 90s at various locations for his Blow Up club night. He approached the band about a new compilation album and now here we are… The double album (released on heavyweight double LP, CD and digital) features 28 recordings that span their twenty year career: including tracks from their first album ‘Oh Ah’ (1995) to their last studio album ‘Cactus vs Brezel’ (2012). It also includes several new mixes including a radically reworked – ‘Everybody In The Discotheque (I Hate) –  (Blow Up mix)’. Both CD and Vinyl contain new liner notes about the tracks contained and lyrics. All the recordings have been re-mastered by Noel Summerville at 33/45 Mastering London.