Following Fay Hallam’s acclaimed collaboration with The Bongolian, (Fay Hallam & The Bongolian ‘Lost In Sound’) for Blow Up Records, the label subsequently released a solo album for Fay Hallam ‘Corona’ in 2015 (CD/180g Vinyl/Digital).

Fay wrote the majority of the songs in a two day whirlwind writing session after returning from a tour of Italy, which ultimately inspired this atmospheric eclectic album. ‘Corona’ has absorbed Fay’s love for the Bossa Nova of Antonio Carlos Jobim and Astrud Gilberto, the experimental productions of the Carpenters and the eclecticism of Beck. There’s even a nod to the 50’s pop of Frankie Laine with ‘Giving Myself Away’ and a sole cover: Paul McCartney’s classic ‘Maybe I’m Amazed’ joins the new set of songs.

With thoughts still fresh of driving through the Alps and soaking up the ambience, the songs took on a reflective mood displaying a softer, more atmospheric side to Fay’s music. An almost nocturnal feel prevails at times, exemplified by album opener ‘Se mi Ami’, perfect for late night listening, whilst her love for Soul and Rhythm & Blues still shines through on songs such as ‘Let Me Into Your Soul’ and ‘Sunny’

Originally from Wolverhampton, vocalist and keyboard player Fay Hallam has performed over the years in acts such as Makin’ Time (with a pre-The Charlatans Martin Blunt), The Prime Movers, Phaze and The Fay Hallam Trinity. She has worked with Billy Childish, Graham Day, Alan Crockford and other luminaries of the Medway scene where she has lived for many years. She has toured the UK and Europe extensively.

CREDITS: ‘Corona’ was produced, recorded and arranged by Fay, with the accompaniment of her group of long time trusted musical collaborators for the performances. Recording took place over several months at various locations with additional production and mixing by Kev Feazey.

“Fabulous. A complete, start to finish journey of an album. Timeless”
LOUDER THAN WAR

“Sumptuous bossa nova soul”
GET INTO THIS

“Beguiling …1000 Blue Ribbons sounds like a great, lost Dusty A-side, and Without A Smile is one of the best things Hallam has recorded” MOJO 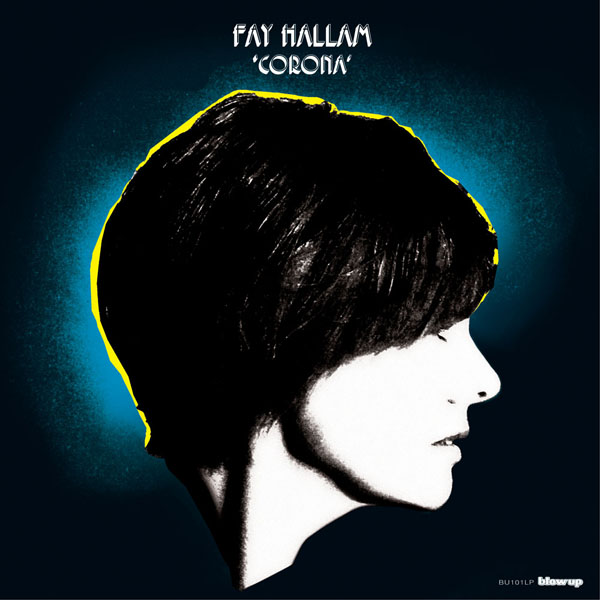